Think Whole Body Cryotherapy is just for elite professional athletes? Think again. When most people think about Cryotherapy, they likely imagine some sort of cold futuristic experience that high performing athletes use for injury recovery. In some ways and in some settings that image is probably accurate, however, Capital Cryo is on a mission to change that perception and I am going to explain how. But first, a little insight about Capital Cryo.

Owned by Susan and Pete Kaminskas, Capital Cryo has three studios in the Washington D.C metro area with locations in Chevy Chase, Bethesda, and Foxhall Square. The Kaminskas opened Capital Cryo with a passion to help people enjoy the health benefits of Cryotherapy in an easy and accessible way, and their philosophy rings true today.

So, let us talk about the Capital Cryo experience. In an effort to give our readers some up-close-and-personal insight of Cryotherapy, I went in personally to interview Elizabeth Gondela of Capital Cryo and try out the service for myself. Full disclosure, it was my first time trying Cryotherapy and, well, to be honest, I was a little nervous. So who am I? My name is Adrianne and I am a thirty-nine year old Northern Virginia local. I work in partnership with APMI Wellness Center and they have given me access to explore their Wellness Center and chronicle my experiences. A little bit about me: I am someone that tries hard to live a healthy lifestyle, workout regularly, and follow a whole foods diet. However, I am getting older and despite all my efforts, I just do not feel as good as I used too. I am at a point in my life where I am realizing that I used to have it pretty easy. Maintaining my weight used to be easier. My energy levels used to be better. Looking younger was easier. My joints ached less. You get the idea. Additionally, I am an “older” mom. I had my son at age 37, and post-partum my thyroid became hyperactive, and though I have been able to resolve the issue with a healthy diet (no medication), I definitely have to keep an eye on my thyroid. Through that experience I learned a lot about autoimmune issues and have become cognizant of the fact that our lifestyles play a large role in autoimmune issues and the management of autoimmune disease. Why does this matter? Well, during my experience, I was surprised to learn that Cryotherapy is beneficial for autoimmune conditions and wanted to learn more about incorporating this into my own lifestyle. So, when I went in to try Cryotherapy, yes, I was very fortunate that they let me try the service for the purposes of writing this article, but really my goal was to offer readers a real experience from a real person who has real issues just like anyone else.

When I went in for my appointment at APMI Wellness Center, I was greeted warmly by Elizabeth (who was wearing a mask and gloves because I went in during COVID-19). The Wellness Center was tranquil and inviting and I felt at ease almost immediately. I checked in and from there she showed me to the changing room, which was posh and clean. I was advised to wear only my undergarments under the plush robe that they provided. I was also instructed to wear the socks, slippers, and gloves that they provide. Elizabeth explained that the goal behind wearing the garments they provide is for the skin to be dry because I was about to be exposed to ultra-low temperatures ranging from -200°F and -256 °F.

I emerged from the changing room and went into the Cryotherapy room. Admittedly, I was still a little nervous but Elizabeth was quick to begin providing guidance. She explained I would get into the chamber and she would raise the floor so that my head would be above the chamber. She also instructed me to keep my arms and legs moving while in the chamber as though I was walking in place. Elizabeth also told me that if I started to feel too cold that I could put my arms over my head. She explained that we have a lot of nerves and receptors, especially on the underside of our arms and elbows and placing them above my head would help with the cold tolerance, if necessary. 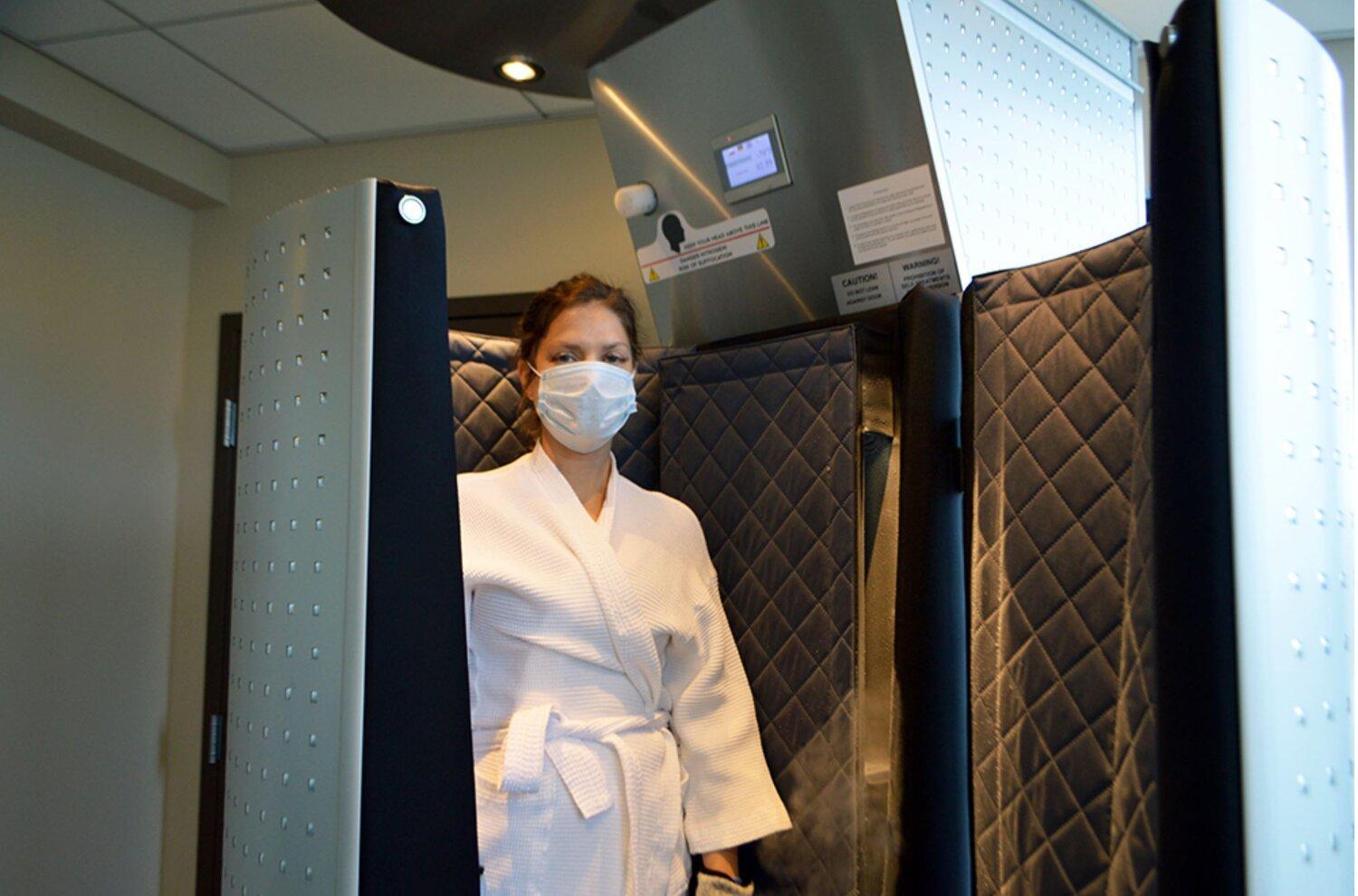 ME (ADRIANNE) GETTING READY FOR A WHOLE BODY CRYOTHERAPY SESSION

Then, the moment of truth came and Elizabeth started my session, and I immediately realized I was going to find out exactly what three minutes of -200°F feels like. Oh boy! As the session began, Elizabeth was right there talking to me and monitoring the chamber. She told me I was likely going to feel a rush of endorphins and more energy after I finished. She also explained I would probably sleep well that night. Next thing I knew two minutes had already passed and it was no big deal! Sure, it was cold but I was handling it just fine. I felt most of the sensation in my legs and it was not until almost the end that I started to feel my skin tingling a little bit. By the time I started to feel a bit more tingly, I was done! My session ended and that was it! I left the chamber and went to the changing room and got dressed! When I emerged I felt like going to the gym. No kidding. I was ready to go for a good workout! And I really did feel the endorphin rush. Talk about motivation! I felt happy and energized, it was impressive!

As I began wrapping up my appointment, I continued chatting with Elizabeth. It turns out that Whole Body Cryotherapy was originally designed to treat Rheumatoid Arthritis (RA) and inflammatory joint diseases, which, of course are autoimmune conditions. Elizabeth explained that many current patients who suffer from RA have been able to go completely off their medication since starting Whole Body Cryotherapy treatment. She also said she has a wide range of patients who seek the benefits of Cryotherapy for other autoimmune conditions. For example, she has known patients that have Celiac disease who accidentally ingest gluten and were able to find post-ingestion relief using Cryotherapy. I was amazed! Elizabeth herself is a runner and uses Whole Body Cryotherapy as part of her own regular health regimen, primarily to treat a knee issue, but also for general wellness. In addition to better running performance, she has also noticed other improvements overtime. She explained that she had developed some vascular lesions on her legs and has watched them nearly disappear overtime since regularly using Cryotherapy. Further, Elizabeth said patients (herself included) say they just feel better with regular Cryotherapy use! It makes sense. Cryotherapy is a modern version of the traditional ice bath only you do not have to endure 20 minutes in an ice bath! As Elizabeth pointed out, if you sprain your ankle, you are immediately told to ice it. Therefore, it makes sense that Whole Body Cryotherapy treats systemic inflammation throughout the body, which is a huge issue for many people these days, particularly for those that suffer from autoimmune disease. Moreover, reduced inflammation is beneficial for athletic recovery, pain management, detox, blood flow, enhanced mood and sleep, and overall wellness. And the best part is it can be done in three minutes and at a very reasonable cost.

“Honestly, I really support the mission of Capital Cryo. Our goal when opening Capital Cryo was to create an environment that was inclusive and welcoming. We wanted to make Cryotherapy accessible to everyone, particularly women. We wanted to create an atmosphere where people felt warm and welcome—and I think we have done that so far. We have three locations now. And, when we joined APMI Wellness Center, it was a really great fit because we wanted to be in an environment where our services could really compliment the other services offered at the center. It has been a great partnership!” 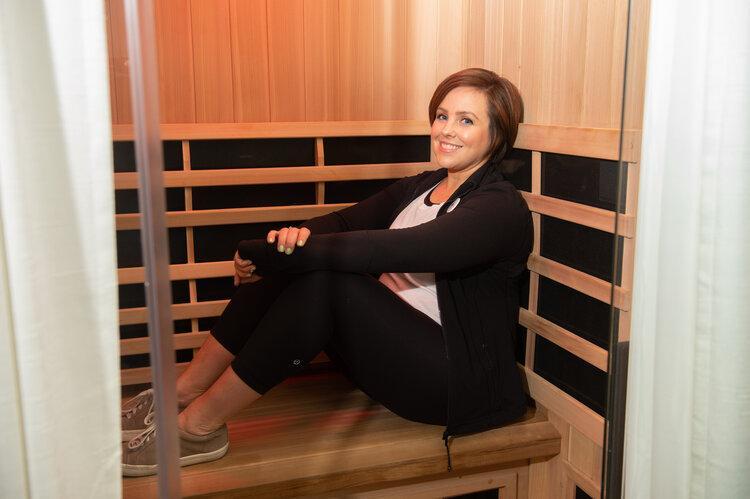 I can say wholeheartedly that Elizabeth is right! My perception and understanding of Cryotherapy has completely changed since my session with Capital Cryo, and I can only assume others will feel the same way after their experience. Additionally, during my visit I started to understand how I could pair Cryotherapy with other services at APMI Wellness Center. For example, I could do a Cryotherapy session, use the Fitness Center, and then get a Massage, all at the same place. I could focus on Body Sculpting and pair that with the Infrared Sauna. I could get a PRP Facial and pair that with an IV vitamin Infusion and a Cryofacial. Admittedly, I started to feel a bit like a kid in candy land, or maybe I just felt awesome from the Cryotherapy, but whatever the case, APMI Wellness Center was most definitely unlike any place I had ever been. 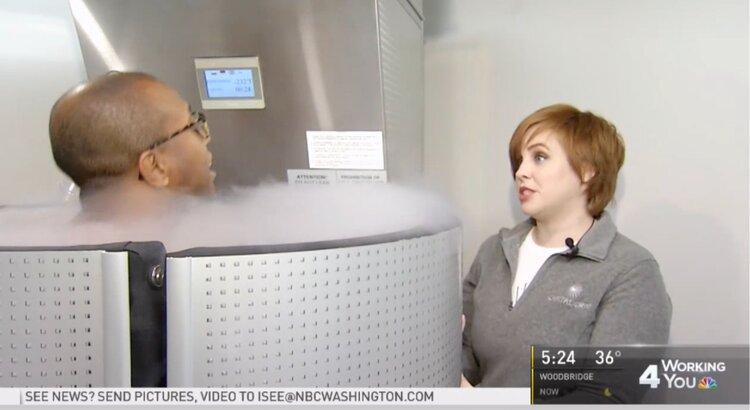 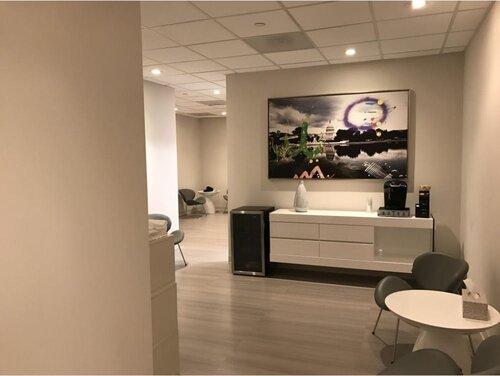 Have you ever worked out every day for an entire week? For those of you who have, more power to you. But with working out comes inevitable soreness and muscle pain. Whether it’s leg day, cardio, core or arms, there is always going to be some kind of pain.